Don’t miss the opportunity to experience biology at its best. Biology in Action is a specially designed programme to inspire KS5 students. Our days are packed with the latest cutting-edge research, delivered in an engaging manner to complement and go beyond the curriculum. Each day also features a special session on examination success.

Register for updates Register to receive the latest information and updates.
Never been to one of our study days?
Watch the video
Home » Subject» Biology A-level

The long and short of telomeres

Following her amazing session at Biology in Action in spring 2018, we discussed the science and promise of studying telomeres with Charlotte Mykura, and ask if they really are the key to a long life.

The telomere is the name given for the ends of your chromosomes. The telomeres form a special structure, with repeating sequences of TTAGGG. The DNA curls at the very ends to form a loop called the T-loop which is an important part of the telomere.

What do they do? 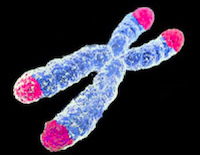 The ends of your chromosomes are vulnerable. They can become frayed and damaged and they also shorten over time as the cell copies its DNA. The telomeres protect the ends of the chromosomes, much like the plastic caps on the ends of shoelaces.

What is the role of telomeres in ageing and cancer?

Every time a cell divides the telomeres shorten. This means your chromosomes shorten. Once the telomeres are critically short, they signal to the cell saying that it is time to stop growing, it is time to senesce (begin to die). This might sound bad, but it protects your cells from becoming cancerous. This is because cancer cells have activated the ability to keep their telomeres long, making them potentially immortal and very dangerous as a result.

Where can I read more?

What is the telomere and how can scientist visualise them

The telomeres and getting older

What do you think the future holds?

We are finding out that telomeres are much more complicated than previously thought. We now know telomeric DNA is transcribed to form RNA called TERRA which also plays a role at telomeres. The enzyme telomerase is responsible for lengthening telomeres only in egg and sperm cells, however we are beginning to understand its role is more complicated than that. As we understand more about telomeres, we understand more about the process of living healthier, longer lives.

If you have recently attended a ttp Education in Action study day and would like to contribute to our advisory group: